In this guide, you’ll learn all about the changes going into effect next year. We’ll also point out other helpful things to know about efficiency standards and SEER ratings for air conditioning systems.

Our experts at Gervais Mechanical Heating and Cooling are dedicated to providing our customers with the knowledge and service they need to have a safe, energy-efficient, and comfortable home.

After learning about SEER rating standards and the new energy efficiency regulations, if you’re considering a new HVAC unit, call us to find the best choice for your home!

New Regulations for HVAC Systems in 2023

As of January 1, 2023, there will be new efficiency standard requirements for heating and cooling systems. The U.S. Department of Energy has revised the way it measures the energy usage of air conditioners and other HVAC units. It is also requiring newly manufactured units to adhere to higher standard levels of energy efficiency using the SEER HVAC rating methodology.

The Department of Energy first enacted regulations around energy usage for home appliances in the Energy Policy and Conservation Act of 1975. This act allows the government to regularly update standards as new data is released. Recent changes take into consideration how the usage of fossil fuels impacts global warming.

The new regulations impact air conditioning and heating systems. Homeowners who are considering purchasing a new unit should be aware of how these changes in legislation will affect their choices in 2023.

What Are The Ways That Energy Efficiency Is Measured?

Air conditioning systems and other HVAC units are considered efficient when they use a lower amount of electricity while maintaining a comfortable temperature in your home.

Typically, homeowners are most familiar with the Energy Star label on air conditioners and other appliances. When shopping for appliances and electronics, you can find this and other efficiency ratings listed on bright yellow tags.

When looking at an HVAC unit, beyond an Energy Star label, you’ll notice up to three other measurements of efficiency:

The EER rating is typically associated with window and wall AC units and HSPF ratings are used for measuring the efficiency of heating units. The new federal regulations primarily focus on SEER and HSPF ratings, and their method of measuring energy efficiency for central air conditioners and heat pumps. All split units – mini-splits and multi-splits, are included in this legislation because of the way that they are configured.

What does SEER Rating mean?

SEER stands for Seasonal Energy Efficiency Ratio. It is the measure of an HVAC system’s efficiency over the entirety of a season.

Before introducing the SEER rating for air conditioners, EER, or Energy Efficiency Ratio, was the standard for measuring energy efficiency. It measured how an AC unit would perform with a set indoor and outdoor temperature and rated based on one day’s energy usage.

Regulators realized that this didn’t provide the full picture and that measuring an air conditioner’s performance over a range of temperature settings would be much better. This change helped to determine an AC’s average energy usage throughout the months that a unit is typically used.

SEER AC ratings provide a standard for understanding the efficiency of central air conditioning systems throughout the warmer season.

How is a SEER rating calculated?

A SEER rating is a numerical form of measurement that allows you to understand the energy efficiency level of your HVAC system. An air conditioning SEER rating is determined in laboratory conditions by simulating the entirety of a season, with the system functioning at a range of temperatures.

There are two units of measurement used to calculate a SEER air conditioner rating:

British Thermal Unit or BTU: For air conditioners, BTUs indicate the amount of power a unit uses to remove the heat from the air. You most likely already know that a higher BTU rating equals greater cooling power.

Electrical Wattage: For SEER calculation, the amount of electricity used, in Watts, is also measured. Someone calculating SEER for an air conditioner will record the number of Watts consumed while the air conditioner is running in the test environment.

Dividing an AC’s BTU rating by the average watts used per hour results in the measure known as a SEER AC rating.

Determining the relative efficiency of an HVAC system throughout this simulated “average” cooling season allows SEER ratings to include everything from early May, when ACs may be required minimally, to the thick of July and August, when most regions in the United States are experiencing their most extreme temperatures. What SEER ratings are designed to capture is the level of efficiency attributed to the air conditioning system across all of these conditions and levels of use.

As the Department of Energy continuously examines how best to measure energy efficiency for HVAC units, two more components will be included in the SEER HVAC rating: Ductwork and External Static Pressure.

SEER2 still uses BTUs and Wattage to determine the final numerical rating, but the test environment has changed. It now doesn’t just simulate temperature, it also includes simulated air pressure and other external conditions. Similar to how regulators realized that a seasonal temperature average is better than one day’s estimate, they have realized that field conditions also have an impact on how energy efficient a unit is.

The other HVAC efficiency ratings, EER and HSPF, have also been updated to new versions, EER2, and HSPF2. The goal for all of these ratings is to best replicate how an HVAC unit would perform in real-world conditions.

As of January 1st, 2023, all units sold must have an updated EER2, HSPF2, and/or SEER2 rating. You’ll be able to look for this number in the unit’s energy guide.

HSPF or the Heating Seasonal Performance Factor is the energy efficiency rating used for heating HVAC units, including heat pumps and split units.

The equation for HSPF is similar to the SEER rating for air conditioners and uses BTUs and Wattage to calculate efficiency. The heating power of a unit is measured in BTUs and Wattage measures the average amount of electricity consumed per hour.

How Does it Help Homeowners to Know What SEER Means?

These ratings may just seem like numbers, but having an energy-efficient unit can make a big difference. When considering a new air conditioner, the most important thing to know is that the higher the SEER rating, the more energy-efficient.

Most residential homes with central air conditioning have an outdoor condenser unit. This portion of your AC sits outside of your home and is responsible for cycling heat out as the unit maintains cool temperatures inside. These units require a lot of electricity to ensure a comfortable temperature in your home.

Air conditioning systems currently on the market have SEER ratings ranging from 13.0 to 21.0. A rating of 16.0 or above is considered to be consuming significantly less energy than an average AC system.

If you want to understand the cost of energy consumption for your current unit, and how much money you can save by upgrading to a unit with a higher SEER AC rating, there’s a simple equation you can use. You’ll need three numbers to do the math:

In 2023, it is estimated that higher SEER-rated units may cost 15-30% higher than those on the market now. It can be a big investment to upgrade, but after doing the math, you’ll be able to determine what long-term savings there may be.

Because they can provide both heating and cooling, Ductless mini-split units also have a SEER rating and will be updated with a SEER2 rating in 2023. Earlier SEER ratings did not take into consideration the impact of ductwork when measuring energy efficiency, but SEER2 methodology has been developed to take ductwork and external static pressure into account. As mini-split systems have no ductwork, they can avoid up to 30% of energy loss and will most likely score higher with the SEER2 rating system.

If you think a mini-split might be the right choice for you when considering a new HVAC system, it’s helpful to understand what a SEER rating is.

With updated technology, a higher SEER rating for an AC means a more evenly regulated temperature in your home. Of course, energy-efficient HVAC units are also much better for the environment. With the advice of an HVAC expert and these calculations, you’ll be well-informed when making the decision to upgrade your system.

The New Numbers, Region by Region

The U.S. Department of Energy has updated the methods of measuring energy efficiency to SEER2, EER2, and HSPF2. In order to conserve energy nationally, they have also raised the minimum rating for new units. HVAC specialists and manufacturers will have to adhere to the updated minimums, and knowing what SEER means, you can confirm whether a new unit is within regulation as well. 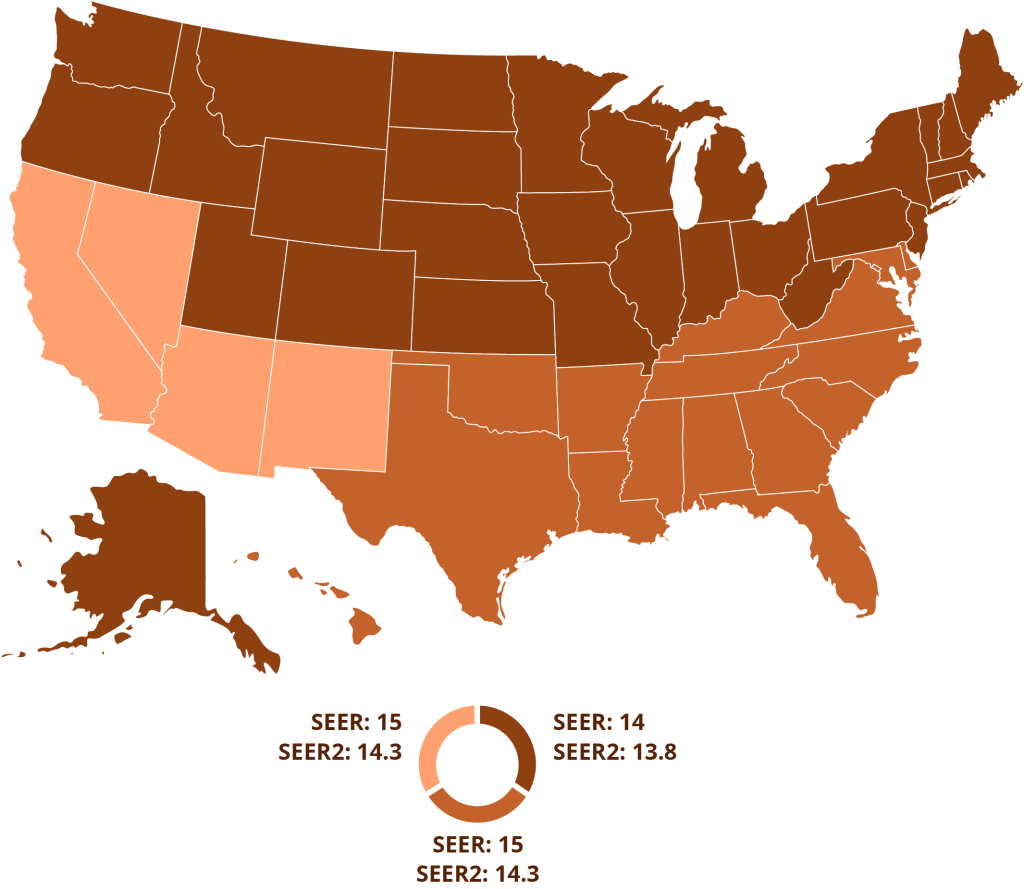 As different regions in the U.S. have different climates, the government has also instituted differing restrictions for Northern and Southern regions. Here are the numbers:

When this legislation goes into effect, the date in which units can be sold and installed varies by region as well.

In the Southern States, air conditioning units that don’t meet the updated minimum ratings will no longer be able to be sold or installed as of January 1st, 2023.

In the North, air conditioning units that have already been manufactured may still be sold and installed, but any newly manufactured units will have to adhere to the new minimum ratings.

All HVAC units will need to be tested with the new methodology, but heat pumps with a 14.0 SEER rating that were manufactured before January 1st, 2023 can still be sold and installed nationwide.

It is important to note that all of this only applies to new units. You’re not required to replace your existing unit with one that meets the new standards, but as these changes are happening now, it’s a great time to explore how an energy-efficient unit could be beneficial!

The Bottom Line: Changes to the SEER Rating, Efficiency Standards, and How They Impact You

The new efficiency standards set by the U.S. Department of Energy go into effect on January 1st, 2023, and use a measurement called the Seasonal Energy Efficiency Ratio, or SEER rating, to determine a cooling unit’s energy usage.

The SEER rating for AC units measures energy usage across a range of simulated temperatures to find an average efficiency rating. The new SEER2 rating also takes ductwork and external pressure into consideration to estimate energy usage in real-world scenarios as accurately as possible.

You can find your air conditioning system’s SEER rating in its energy guide, or on a sticker right on the unit. By understanding what a SEER rating is, you’ll be able to read this information and see how energy-efficient your existing unit is. Just remember, the higher the better!

If your air conditioning system has already been installed, you do not need to worry about the SEER rating regulatory changes coming in 2023. These SEER rating changes only pertain to newly manufactured units and new installations. However, there are many benefits to having an energy-efficient air conditioner. If you’re looking to upgrade your HVAC system, now is a great time to explore new options.

Units with a high SEER HVAC rating typically run smoother and more consistently because of the technology used to conserve energy. Less energy usage means lower utility bills. There are also tax credits for purchasing an energy-efficient unit, saving you even more! Energy-efficient air conditioning units are also better for the environment, ensuring great air quality inside and outside of your home.

As a homeowner, if you’re considering purchasing or upgrading an air conditioning or heating system, an HVAC repair expert will be able to guide you in choosing the best unit for your home. Our technicians can also offer advice on how to extend the life and increase the efficiency of your existing unit.

The entire team at Gervais Mechanical believes in providing our customers with expert service every time. Call us today!

Fill out this form and let us know what’s on your mind: